A door (set) installed in a commercial or public building must physically operate for long periods of time even under conditions of violent usage where no exercise of care takes place. If the door does not function correctly at all times then other performance characteristics such as fire and acoustics may be compromised and undue maintenance costs will be incurred.

LD-Light Duty
Low frequency of use by those with a high incentive to exercise care, e.g. by private house owners - small chance of accident occurring or of misuse. Internal and external doors on dwellings.

MD-Medium Duty
Medium frequency of use primarily by those with some incentive to exercise care - some chance of accident occurring or of misuse. Office doors providing access to designated public areas but not used by the public.

HD-Heavy Duty
High frequency of use by public and others with little incentive to exercise care. Chance of accident occurring and of mis-use. Doors installed in retail, health, education and commercial buildings which provide access to designated public areas and which are used by the public.

BS EN 947:1999 "Hinged or pivoted Doors - Determination of the resistance to vertical load"

Provides a method to determine the permanent deformation caused when a vertical load is applied to an open door leaf fixed in its own doorframe as part of a doorset. Such downward force that might reasonably be expected (a child swinging on a door handle) to neither damage nor impair the performance of the door. 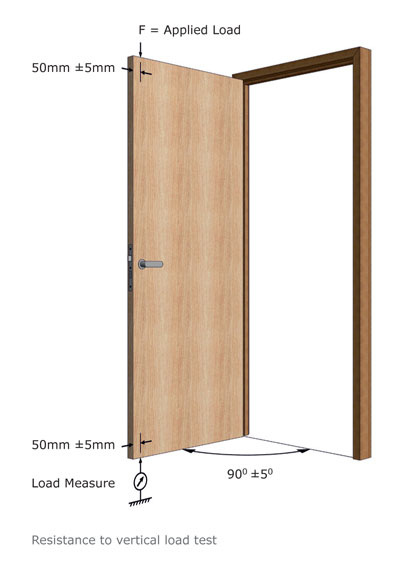 BS EN 949:1999 "Windows and Curtain walling, doors, blinds and shutters -Determination of the resistance to soft and heavy body impact for doors"

Provides a method to be used to determine the damage caused by striking with a soft and heavy body, the face of a closed door leaf fixed in its own doorframe as part of a doorset.  Such forces that might reasonably be expected from impacts by human bodies and substantial objects with similar characteristics that should neither damage nor impair the normal performance of the door.

Provides a means of classifying where appropriate, the performance of door leaves, door frames, door sets and door assemblies according to their strength in resisting vertical load (BS EN 947) and soft/heavy body impact (BS EN 949). The performance levels indicate normal usage for a range of categories of duty similar to those in DD171 i.e. Light Duty, Medium Duty, Heavy Duty and Severe Duty.